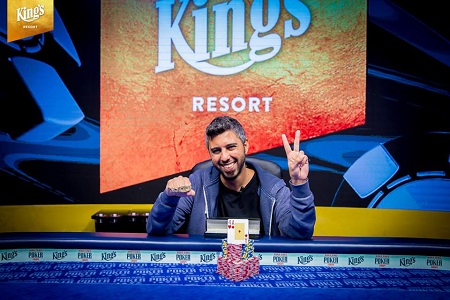 Ship it to Israel! Again!! Asi Moshe added a second piece of bling to his collection when he won Event #2 €1,650 NL Deep Stack at the King's Casino in Rozvadov. This special win at the World Series of Poker Europe occurred on the back of another win from Israel. The country has only 12 total bracelet wins and Moshe has two of them.

Less than 24-hours earlier, Tamir Segal from Israel needed only four hours to finish the final table of the Euro-Colossus. Segal won his first bracelet in WSOPE Event #1 Colossus for a €203K score.

Asi Moshe is no stranger to WSOP events. This run marked his 25th total cash for the pro from Israel. Moshe advanced to four other final WSOP tables in his short career and he took down one of them for his first bracelet back at the 2014 WSOP. Moshe binked a donkament for a $582K score after he faded a field of 2,396 runners.

The 2018 WSOP Player of the Year front runner Shaun Deeb went deep in Event #2, but the American pro missed the final table. Deeb busted in 11th place and added a couple of points to his lead in the POY race.

The token Brit at the final table, Jimmy Bullimore, was dunzo in third place. His elimination set up the finale between Asi Moshe and Robert Schulz. Moshe was seeking bracelet numbero dos, while Schulz was trying to win his first pice of bling and bring another title home for Germany.

Moshe picked off Schulz heads-up for the win. Schulz earned a runner-up score worth €50,842. That's nearly $59K USD. Not too shabby, eh?

Moshe won his first bracelet back in 2014 when he binked a donkament. Moshe became the second player from Israel to win multiple bracelets, joining Rafi Amit.