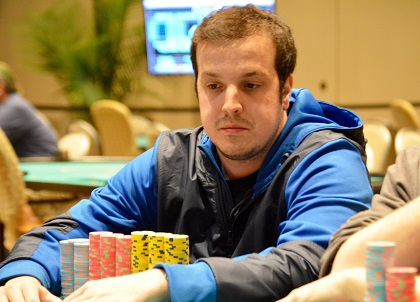 And then there were six in Atlantic City. Which five are gonna get whacked and end up in the marshes of New Jersey? And which player is going to step into the winner's circle and become the next WPT champion?? The 2018 WPT Borgata Winter Poker Open is the anchor event at the Borgata's yearly series to kick off the new calendar year. The Borgata is the legit crown jewel of Atlantic City and one of the swankiest casinos on the East Coast. For over a decade, the Borgata is the focal point of poker in the Northeast.

The $3 Million Guaranteed event attracted 1,244 entrants for a total prize pool worth $3,967,000. This year's numbers are off from last year's record-setting event, which attracted 1,312 players. Dan Weinman outlasted everyone to win his first-ever WPT event on his birthday for a $893K score.

Only six players are still alive in the 2018 WPT Borgata Main Event. Zach Gruneberg sits on top of the big baller stack with 17.6M. WSOP Main Event champ Joe McKeehen and Justin Zaki have mid-range stacks between 5.5M and 5.9M, and yes, that's Michael Marder lingering in the middle with 3M. Meanwhile Eric Afriat and Stephen Song are battling for the basement.

Eric Afriat is the only WPT Champions Club member still alive. The Canadian is seeking another WPT title. Back in 2014, Afriat shipped the WPT Seminole Hard Rock Showdown for a cool $1 million. The win at the SHR was his biggest cash to date.

The WPT Borgata final table begins at 2pm ET on Friday. There will be a live stream starting at 2:30pm ET or 11:30am Vegas time. Tune in here...